A While ago I bought a graphics tablet, but never took the time to sit down a learn to use it.
I stumbled across a cool tutorial over at Vectips that showed you how to start with a stock image of a person and turn it into a zombie.

Several hours later I have this. 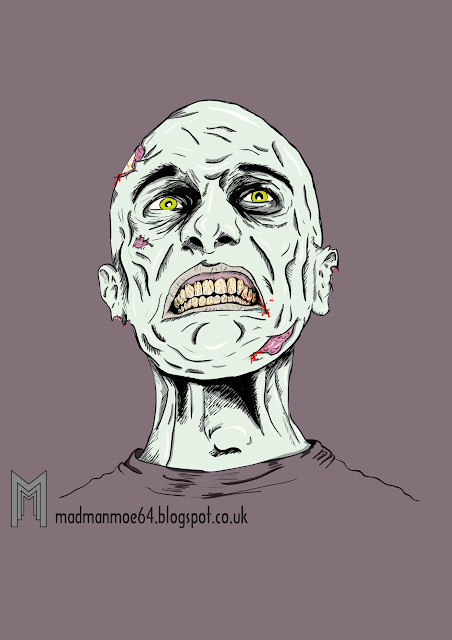 The idea was to use the tablet for concept design work, so this isn't really the style I want to use. But this was fun and I got used to using the pen.
Posted by Tom Baum at 01:53 No comments:

I've made quite a few cork-board maps, in fact it probably makes up the majority of my machine's output.
So when me and a friend got talking about how long it was since we'd played Risk, I decided to put my expertise to use and cut my own Risk board out of cork.

For those who haven't heard of it 'Risk' (or 'Stratego') is a world domination board game, you have several units and use them to protect your own territories and attack others, the outcomes of these battles are decided by dice rolls. The goal is to expand your empire until you have defeated all the other players
I did a fair bit of research about all the different versions, and the standard game size, then began drawing up the parts as usual.

The pieces come out of the machine like this, I put vinyl over the areas where the text was engraved so that I could paint the letters. The machine cuts a stencil as it's engraving, although not perfect I've had quite good success with this technique before, but never with such small text.

To finish the pieces, I stencil the letters in black, add on any islands with stiff wire, and then stain the whole continent its proper colour. I think I would have preferred them left unstained, but once I'd done one I had to do the others as well.

I could have left it there and gone out and bought the other parts, but I got the idea in my head to make my own dice.
I have some scavenged door panels lying around that appeared to be made of solid mahogany, so I cut a strip off and began by machining a flat on both sides.
Once it was flat and laminar I measured it then had my mill cut out several perfect cubes.

This is my first attempt at multi sided machining, the main problem of which is lining your pieces up when you flip them over.
Seeing as I had 5 dice each with 6 sides I needed a way to perfectly line up each side and relatively quickly.

I decided to machine a hole the exact size of the dice, this way I just have to push each blank die into the slot and hit go, then I just switch to a new die nice and quickly and go again.

It still took me over an hour to do all the dice, but once they were finished I was really happy with them.

All that was left was to print out some cards, get some pieces. I'm using map pins, which I think is a significant improvement over the original because you're not always knocking your army over. I managed to find three different types of coloured pins to use as the 1, 5 and 10 units. But because they don't take up as much space you could easily just use lots of ones.

The cards were a rush job, thrown together with google images in InDesign. I would have liked to mill some lino prints and stamp the cards that way, but I doubt I'll get round to it now.

The actual game progressed as it always does, I overreach, then am quickly crushed into a small corner, where I hide while the other two duke it out. (I'm yellow, both figuratively and literally)

Overall I think it was a pretty successful game, the only complaint was that it was a bit awkward fishing around in the box of pins to find the right one, they asked for a subdivided box, but I though a scrap of cork on which you could organise your units would work just as well.

Next I fancy having a go at a settlers of Catan game, but whipping out all my old Warhammer scenery stuff to make the board.

This was originally a present (can't afford a Nexus 4 myself) So I drew up the design with reference only to a diagram of the phone I found in the user guide (scaled by googleing the outer phone dimensions)
I had planned this as a bike mount, and was going to mill it out of black perspex. However due to time time constraints and issues with milling plastic, I had to quickly mill this one out of MDF.

I was surprised how well it worked, the phone fit the case almost perfectly, a few issues were:
- speaker and camera holes didn't quite line up
- I had neglected to add holes for the proximity sensor
- top of the touch screen wasn't accessible
- the hole I'd left for the power switch was bit awkward for larger fingers.

I quite liked the look of the wooden phone case, so I tweaked the design, ordered some sheets of thin mahogany and cut a new set of phone pieces.

The pieces are layered up to create the case, the font plate is attached via several small neodymium magnets.
I also finished the case with Danish oil to protect it from moisture and dirty fingers.
I was able to slim down the whole case by milling out a pocket in both the front and back plates. This wouldn't have worked as well with MDF as it looses integrity once you remove the face of it.

Instead of leaving a hole for the power switch I designed this hinge. The edge is thinned down and not glued to the rest of the body, allowing it to flex slightly and press the power/wake switch.
When the phone is assembled the switch appears as a slight depression in the side so that you can find it easily.

I've long been a fan of Red Dwarf, so I was really excited for Dave's reboot.
This 'Space Phone' features heavily in the season premiere 'Trojan' as Lister spends the majority of the episode on hold with customer services.

This is really just another repaint job, it's nice to add to my prop collection without loosing months of my life.
The good folks over at the RPF identified both the phone model and the 'magnetic pickup tool' that the original prop was made from, all that remained was to glue the two together and give the whole thing a coat of the iconic hull colour of the Red Dwarf.


This is a university project base around the Napoleonic fort at Shoreham beach on the south coast.

With a final goal of building a film studio/school of some description our first task was to create a 'camera device' to observe and interact with the site.

I conceived a device which would use the existing railings on site to take long tracking shots.


The main problem to overcome were the large lugs where the rail attached to it's posts.
After a few weeks of prototyping I set about laser-cutting my creation from MDF.

The main design consisted of several of theses notched wheels. Each wheel has four sets of bearings which sit on the rail and allow it to roll along.
When the device reaches one of the lugs on the rail, the large notched wheel will rotate, stepping over the lug and landing on it's next set of bearings.

A series of neodymium disc magnets are used to confine the wheels to 90 ° rotations, to ensure that they are always sitting properly on their bearings.

The final device has 3 sets of 3 wheels. Each set is distributed around the rail to grip it firmly and provide a smooth ride.
The long legs help add balance and keep the lower sets of wheels in contact with the rail.

And finally here is a gif of the crawler working.

My crawler device was grouped together with two others, a camera mount that was triggered every time the crawler took a 'step', as well as a pedal powered drive system.
Whilst the camera mount worked relatively well, we had trouble rigging up the drive in the pouring rain (bad timing for our final installation).
I made another trip on a sunny day to get these pictures, but didn't have the other parts.

Still I'm pleased that the stepping action performs as intended.
Posted by Tom Baum at 19:15 No comments:

This was a short project I did last summer.
My sister was putting together a Japanese inspired garden and asked me to build a small bridge to cross the pond we had just put in.


There are several Japanese styled bridges, but in such a small space I decided to build a small bridge with a slight curve to it

Making a Goldeneye limpet mine, the ones Bond uses to trash Alec Trevellian's lair at the end of the film*.

This was a nice easy build.
When I found out that the Limpet mines  in Goldeneye are just repainted joystick bases I quickly set about tracking down the correct one.

Then it was just a case of repainting and mounting the button and LEDs.

Nice and simple, but it's still one of my favourite pieces. It brings back fond memories of hours wasted on the N64, seeing how many mines we could stick to a friend.

* I seem to remember that Alec actually disables the mines and Bond instead uses the grenade pen to blow up the petrol tanks, but it's that whole scene.

This blog documents stuff that I have built. Recently this tends to be props for films and games. However the projects have ranged from tiny electronic gadgets, to a modestly sized bridge.
I actively post on theRPF.com and Instructables.com and quite often repost my stuff here.
If you want more info on anything or want to use some of my pictures or design files don't hesitate to contact me.
- Tom